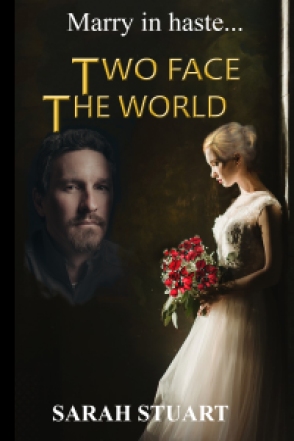 Book 2 in the Richard and Maria series – out now!

Richard and Maria’s wedding is romantic and joyful, but both are still haunted by past rejections. Sinister letters and unwanted gifts arrive, and the more each tries to protect the other by keeping them secret, the heavier the burden of guilt and anxiety.

Vicious attacks on lives and property begin. Richard and Maria are determined to uncover the identity of their enemy, but they have no idea who might have a motive. Will their love hold fast or the old saying “marry in haste, repent at leisure” prove true?

Reviewed by Divine Zape for Readers’ Favorite
Two Face the World: Marry in Haste… by Sarah Stuart is a suspenseful romance with strong psychological hints, a second entry in a gripping romance series. I first read Three Against the World and was literally hypnotized by the author’s exploration of the emotional depth of the characters, but in this new novel, she takes the stakes higher. Richard and Maria are a new couple and while they have every reason to be happy, both are haunted by their past, both caught in a powerful, disturbing dilemma — face the truth of their past and risk their marriage or keep their secrets from each other and live in constant fear. But when their lives and property are attacked, they make the decision to uncover the person behind the attacks.

Sarah Stuart spins a tale that will resonate with readers. The characters are genuinely flawed and their humanity is deftly handled. The author has the gift of infusing the narrative with realism, making readers feel as though they are confronted with a story that unfolds before their gaze. The narrative starts with a powerful premise and deals with a problem that readers encounter in real life. The question that begs for an answer is: What do we do with our past when we get married? The strong narrative voice combines with the crisp prose to create a reading experience that is enjoyable. The prose is atmospheric, the plot intriguing and the characters skillfully developed with psychological and emotional depth. Apart from her gift of storytelling, Sarah Stuart creates the kind of conflict that defines the dynamics of the story and keeps the reader utterly engaged. Two Face the World: Marry in Haste… is another excellent read for fans of contemporary romance.

Reviewed by Ruffina Oserio for Readers’ Favorite
Two Face the World: Marry in Haste… by Sarah Stuart is the second book in the Richard and Maria series, a suspenseful romance that explores the complexities of a relationship between two compelling characters and the choices they make. I love books that are intense and a plot structure that puts the characters in stressful situations, and this story does just that and more. We encounter Richard and Maria, a couple who are newlywed, and while they have everything to feel happy about, they are each haunted by their own past. When they start experiencing attacks on property and their lives, they are forced to face reality and lift the lid on their secret fears and insecurities to each other. But can they identify their enemy and save their marriage?

Sarah Stuart knows how to grab the attention of readers and keep it by creating characters that are rock solid and real, with a humanity that readers can easily connect to. It’s very easy to care for these characters, because they are written into a world that is familiar to most readers and they face dilemmas that nurture the conflict and make it strong. The plot advances through a wave of suspense that gets readers intrigued and curious to find out what happens next. The prose in Two Face the World: Marry in Haste… is beautiful and the author combines the art of writing vivid descriptions with well-written dialogues to create emotionally and psychologically rich scenes. An entertaining read, indeed.

Reviewed by Lesley Jones for Readers’ Favorite
In Two Face the World by Sarah Stuart, Richard and Maria can now officially announce their love to the world, three years after being thrown together in the most unusual circumstances. They have each other, promising careers and a wonderful future to look forward to. That should be enough, but their tormented pasts of rejection and loneliness have left them damaged emotionally. They both question if they have a right to happiness. Someone they know agrees with them and is secretly holding a grudge and wants them to separate. A threatening letter lands on Richard and Maria’s doorstep. As they try to solve the mystery, the threats become more violent and sinister. The pressure is on to find the person responsible before someone gets seriously hurt. With unexpected personal problems, can Richard and Maria once more stand together against the world, or will this put an end to a great love story?

Sarah’s relaxed writing style really made this an enjoyable read. She places such detail in the story line and characters’ personalities, it brings a realism to relationships, life struggles and the emotion a person feels in dark situations. The characters’ mannerisms and dialogue also suit their personalities perfectly. The narrative just flows and you get lost in the lives of the characters. Richard and Maria are complex and tortured souls, full of self-doubt. This is not just a beautiful love story, but a tale of two people overcoming years of rejection and accepting who they are. I think the star of the novel, though, was the little Jack Russell; he was adorable. I had the pleasure of reading Three Against The World, and although you do not need to read the first story to enjoy this sequel, it would give you more of an insight to the background of this endearing relationship. Highly recommended if you enjoy real-life romance novels.

Other books in series:

Book One: Three Against the World: A Waif, a Stray, and a Romance – Read Freely Best Indie Book of the Year Winner.

Richard loses his job, so his gold-digging fiancée ditches him, leaving him alone but for Ben, a stray dog he adopted. But the day isn’t over! His ex-wife dumps a daughter he didn’t know he had on his doorstep. Rejected by her mother, Maria believes she’s an unwanted burden. Can a single dad, an anxious teenager, and an ill-treated animal find in one another the love, and the family, they crave? Richard is determined that they will; he’ll find a woman who will love him no matter what and accept Maria as her stepdaughter. Unfortunately, Richard tends to date the wrong women…